Canadian poet James Deahl is no stranger to this blog. News about his books and events often populate my posts. With over 20 poetry collections linked to his name, he’s currently one of the most prolific poets in Lambton County. He’s a busy guy. That’s an understatement.

His latest book Unbroken Lines: Collected Poetic Prose 1990-2015 was released last fall by LUMMOX Press and was officially launched in Toronto in November. On Saturday, January 16, he will share the spotlight with his literary wife Norma West Linder who will be launching her children’s novel The Pastel Planet. The event starts at 2 p.m. at The Book Keeper, Northgate Plaza, 500 Exmouth Street in Sarnia, Ontario, Canada. (More details on Linder’s book will appear in a future blog post.)

So far, reviews on Deahl’s latest book have been favourable.

In a Canadian Stories review, Carol Malyon wrote: “These works are gentle, reflective, meditative, and the language is poetic. They have been created by a mature poet, in complete control of his craft, and of the life that feeds it.”

In a news4u review, Patrick Connors wrote: “he never writes the same piece twice. In content as well as form, he seeks to expand and diversify his body of work.”

One of my favourite Deahl poems from this new collection is “Theology of Stones”. In the poem, he poetically describes how pilgrims were so focused on their journeys that they failed to notice the small yellow flowers, the singing rocks, and “the forgotten beauty of innocent desire*.” 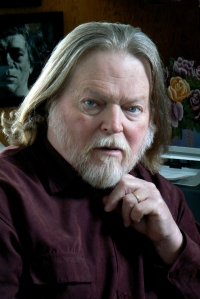 Unlike the pilgrims in his poem, Deahl manages to capture (and share in his writings) those subtle details that are often missed. Many of the poems reflect his experiences as a traveller. As he states in the Author’s Preface, “The pieces in this collection were written over a quarter of a century: from May of 1990, while I was in England, to May of 2015, when Norma and I were in Connecticut.”

Similar to the rocks and other scenes and scenarios he writes about, his poems enlighten and keep singing long after they are read.

Last December, I asked Deahl to share his thoughts about his writing process. Below are his responses:

Unbroken Lines is a collection of brief prose poems, micro fictions, and creative non-fiction. While I was on a government-funded reading tour of Britain in the spring of 1990, and upon my return to Canada, I wrote seven prose poems. They simply happened. Back then, as he remains today, my best-loved prose poet was Robert Bly, who has laboured hard to establish prose poetry as a major prosody in English.

2)      How does your work differ from other writers? What makes it unique and special?

Every writer approaches the universal topics from a unique point of view. The same is true of painters. That is what keeps art alive. It is made by interesting people who bring a perspective not our own. Through art we find a fresh appreciation of life.

For me, writing and reading go together. I write and read as part of the same creative process. In all but a very, very few cases, my first draft is pen & paper. And most often my second draft, too. I delay typing poems up because, once typed, it seems to be more difficult to discover other possibilities, other directions the poem could take.

James Deahl launched his latest book at the Main Street branch of the Toronto Public Library which is where he presented his first reading as a professional writer thirty years ago.

First off, I intend to present readings in the cities where I have lived and where I am well known within the writing community: Pittsburgh, Ottawa, Toronto, London, Hamilton, and now Sarnia. Next up is The Book Keeper. This will be on Saturday, January 16th at 2:00 p.m. Then I hope to do a West Coast tour: Los Angeles, Portland, Victoria and Vancouver, that sort of thing. The only way to sell books is in person. You want to sell books in New York, you go to New York. New York is a big goal.

Robert Bly for one. He has achieved the most in the field of prose poetry. Also Bly’s colleague James Wright. In Canada I mainly read Allan Cooper. And in French, the work of Francis Ponge should recommend itself to all readers. I like Bly’s romanticism, a quality not found in Ponge. But in Ponge I value his objectivity. Cooper is very fine, too. His description is excellent, really without equal, although his “leaps” are less smooth than Bly’s. In my view, Robert Bly is the master of the poetic leap.

6)      You are a prolific writer. What advice would you give to a young writer just starting his/her career as a writer? 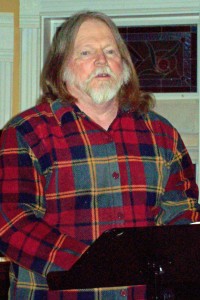 James Deahl shares his work at the April 2014 Spoken Word event at the Lawrence House Centre for the Arts in Sarnia, Ontario, Canada.

7)      What are some of the challenges facing today’s writers?

The two main ones are (1) the paucity of rigorous criticism, especially here in Canada, and (2) the strident limitations on monetizing what one has written. Criticism helps a writer become better, and we should all desire to be better. Being paid helps one survive. A third challenge would be having Canadian writing taken seriously in major nations like the United States and Britain. Now that Alice Munro has won the Nobel Prize perhaps a few more doors will open.

8)   What future writing project will you be working on following/during your tour?

This winter and spring (and maybe into the summer) I am working with Katherine L. Gordon on a joint book on Southwestern Ontario landscapes, a book to be published in Israel. I also have to get another lyric poetry collection, To Be With A Woman**, into print. Writing is pure joy; getting stuff published is hard work.

9)   Is there anything else you would like to add about your book, your writing, your past or future?

Nothing other than the pursuit of perfection. An elusive goal never to be attained.

Thank you for sharing your comments.

**A few days following this interview, RD Armstrong of LUMMOX Press accepted James Deahl’s manuscript To Be With A Woman. It will be published in 2016. Congratulations!

Watch this blog for additional Canadian Author and Poet Profiles.