“Remember me with humour,/The jokes I loved to tell and hear told,/The pranks that were played by me and on me.” John Drage*

He towered like a silo over a flattened toad poem. I can still hear his dry cough, the way he spun a tall tale or a comical verse with a straight face. He made so many people laugh.

In Memory of the Late John Drage. He made so many people laugh.

Almost a year ago** (December 11, 2015), Sarnia-Lambton’s literary community gathered with his family and friends and embraced the fond memories of the late John Drage, a local storyteller /poet who often slipped jokes from his shirt sleeves and magically created laughter with his dry wit. If anyone had a “hole in his or her bucket”, he would try to fix it. He was not only handy with a hammer on the farm but also dandy with his words when he moved into the city.

“I was especially fortunate to have been able to hear many of the stories John told about his own past, about his own family, and his skills in the kitchen,” said historical fiction writer Bob McCarthy in his tribute to John at last year’s celebration of life. “As a local historian, I was able to learn about many of the early pioneers who farmed in Southeast Lambton, people John had known, folks who built so many of the small communities in places like Shetland.” 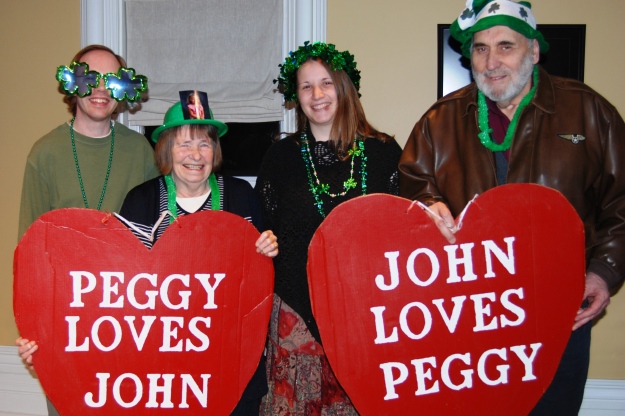 John had a passion for the arts, marriage, learning, nature, and love in general.

What a loss for the local literary community! He (and his wife Peggy who predeceased him by four years) left two holes in my bucket-heart.

I first met John back in 2002 when I joined a local writers’ workshop group. He penned and shared what he knew, then used his imagination to liven it up. He also loved local history and often wrote humourous and traditional form poems that rhymed.

“Like all poems, a humourous one starts with an idea or a line,” wrote John in an article called “Finding Humour in Your Poetry” published in the May to August 2015 Verse Afire. “I am a tall man with a short memory. I try to keep pen and paper handy to catch fleeting ideas. Sometimes, I start with an opening line and work forwards. Sometimes, I start with the last line and work backwards.”

His humour followed him to Spoken Word events where he would recite such old-time favourites as the children’s folk song “There’s a Hole in My Bucket” or attempt to teach the audience how to play bagpipes without the actual instrument. 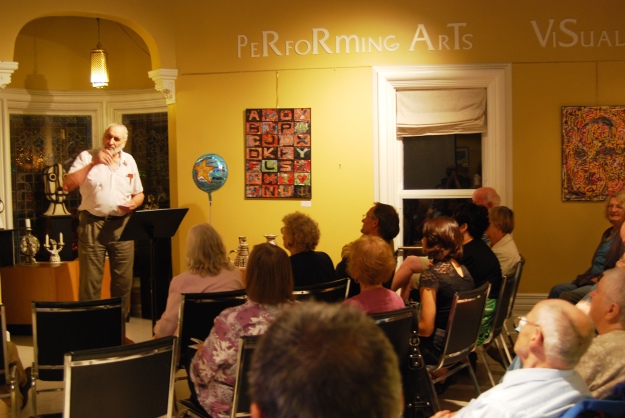 John was a regular reader/performer at Spoken Word at the Lawrence House Centre for the Arts in Sarnia, Ontario, Canada.

He was a regular contributor to: Canadian Stories, a national folk magazine written by or about Canadians; and Daytripping in Southern Ontario, the “Biggest Little Paper in Canada”. For several years he was also a columnist with The Observer, a daily newspaper from Sarnia, Ontario, Canada.

Despite his accomplishments, fame did not interest him. As a writer he was content with the old ways: plunking on his typo-infected typewriter and submitting work via snail mail. Most of his work is compiled in books published by Sydenham Press, a small press he owned and operated with his late wife, the award-winning poet Peggy Fletcher. 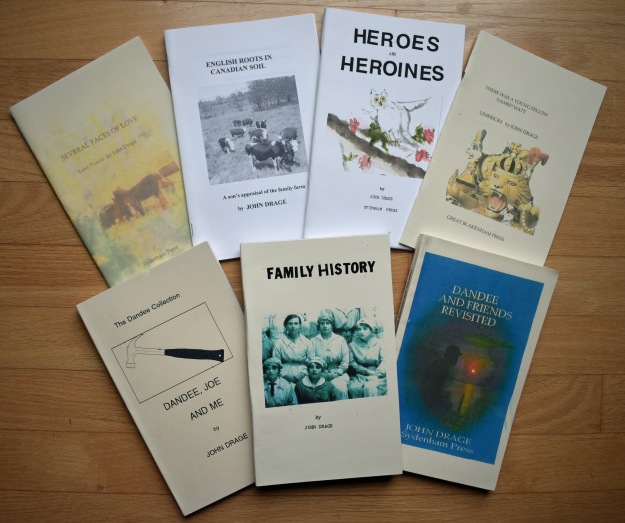 Several books by the late John Drage were published by Sydenham Press, a small press he owned and operated with his wife, the late Peggy Fletcher.

His sudden and unexpected death from a stroke at the age of 85 shocked those who were close to him.

“He was like a father figure to me,” said Melissa Upfold, former Spoken Word Sarnia host who also lost her own father a year ago. “He and Peggy attended all my readings and art shows. They were true supporters of the artistic and literary community.”

“Such a great loss to our writing community, said Phyllis Humby, founder of the social networking group Lambton Writers Association. “John was a gentle man of great wit and compassion. Quiet and unassuming. Some of us are comforted to imagine that he is with Peggy now. And [his dog] Patches, too. Still heartbreaking to say goodbye.”

John recites the children’s folk song “There’s a Hole in My Bucket” during a Spoken Word event.

“He always made jokes about his height and my lack of,” said Lynn Tait, spokesperson for the AfterHours Poets group. “His ‘Ode to a Flattened Toad’ is a classic, recited for us annually, and I will always remember his Dandee stories. His ability to memorize and recite his poems was amazing, and his on-going, tongue-in-cheek limerick battles with Anne Beachey [close friend and storyteller] were legendary. He was a kind and gentle man. All of us in After Hours Poets, miss him very much. He is back home now with his soul mate, Peggy.”

“John Drage was more than just a poet,” said I.B. Iskov, Founding Member of TOPS.  “He was a storyteller and a humourist. The Ontario Poetry Society was fortunate to acquire a short essay from John appropriately titled, “Finding Humour in Poetry”…. His wit, his charm and his “voice” will be missed.”

“I still can’t believe he’s gone,” said Norma West Linder, one of the members who established Writers in Transitions (WIT), a local writers workshop group. Below is a poem written by Linder, as a tribute to her long-time friend:

Stuffed in an envelope somewhere
in my cluttered computer room
John’s obituary
–John, who made everyone laugh
with his droll sense of humour
his limericks and tall tales
delivered with panache

John, who was like a brother to me
for half a century
taken by a massive stroke
on Pearl Harbour Day

This week I look back and remember John Drage, a writer who gifted the literary community with such fond and humourous memories. 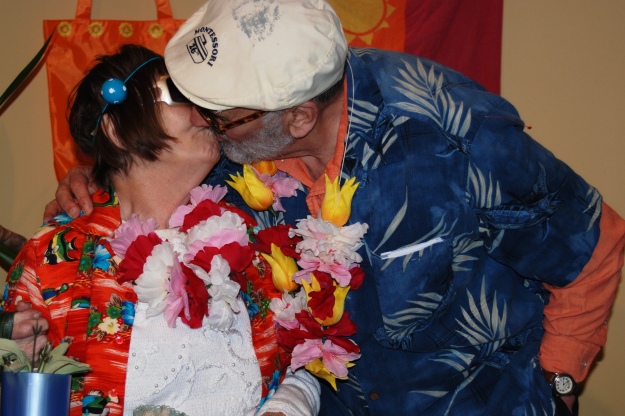 In Paradise: John Drage reunited with Peggy Fletcher, the love of his life.

*originally printed in the program for the Service of Thanksgiving and Celebration for the Life of John Alfred Drage held Friday, December 11, 2015 in Sarnia, Ontario, Canada. Reprinted here with permission from the estate.

**Almost a year has passed since this blog was first drafted. It was revised and posted here for the first time as a reminder that John Drage has not been forgotten, that his spirit and love for others remain in Sarnia’s literary community.

***poem used with permission from the poet. 2016 © Norma West Linder