“Canadian literature has emerged as a world literature in the full sense of the term,” – James Deahl, editor of TAMARACKS*

It’s not every day that an American publisher takes an exclusive look at Canadian poetry but last autumn Lummox Press from San Pedro, California forged ahead and published TAMARACKS – Canadian Poetry for the 21st Century, a 240-page anthology edited by Sarnia, Ontario resident James Deahl and compiled for the United States market.

In less than a month, over half of the 113 contributors of TAMARACKS will begin touring the province and sharing verses from this anthology filled with over 175 contemporary poems ranging in topics from World War I (Robert Acorn’s “Passchendaele”) to Canada’s Residential Schools tragedy (Rhonda Melanson’s “One Catholic’s Apology for Residential Schools”). As of today, eight celebration launches have been scheduled between late March and early May 2019 for such Ontario cities as Hamilton, Toronto, Welland, and Sarnia.

Another celebration, this one organized by the publisher, will be held in California in mid-April. Additional events in London and North Bay are being considered for the autumn.

“TAMARACKS is the first survey of modern Canadian poetry (in over 30 years) to be published by an American small press outfit,” stated RD Armstrong, publisher of the California-based press, on his website.  “This mammoth undertaking was hammered out in half a year’s time and was fraught with setbacks and near-fatal difficulties. But through it all, editor and publisher managed to work together, so that TAMARACKS could come into being.”

The editor James Deahl, who was born in Pittsburgh, Pennsylvania but spent most of his adult life in Canada (the last 7 1/2 years in Sarnia), is an avid supporter of Canadian poetry and at one time published numerous poets through Mekler & Deahl Publishing. Not only was he close friends to such poetic icons as Milton Acorn, Dorothy Livesay, Raymond Souster, Al Purdy, and Sam Simchovitch but he is still acquainted with hundreds of poets across the country. As stated on the back cover, the book includes “the work of 113 Canadian poets from Halifax (Brian Purdy) to Vancouver (Daniela Elza). It also contains detailed biographical and bibliographical information on these important writers.”

In fact, this acknowledgements and contributors appendix is so comprehensive that it comprises 55 pages (over one fifth of the book’s content).

“Full credit to book designer Chris Yeseta for making a truly lovely book,” wrote Deahl in a September 2018 e-mail to contributors. “And, of course, there would be no TAMARACKS without 113 top-quality Canadian poets.”

As one of the contributors, I feel honoured to have my poem “An Old Miner’s House” as well as my full-colour cover image and several black and white photos included in the book. For that reason, I refrain from posting on this blog feature my personal review of the anthology but will mention that several positive reviews (by literary scholars) have already been listed on the Lummox Press website.

“In the 21st century, poets, artists, political and social leaders, and scholars have been questioning what Canada is and what directions Canada should take,” said Deahl. “Clearly the Justin Trudeau version of Canada has failed to work. TAMARACKS shows where Canada is right now. It is time to take stock and decide what comes next. Our nation requires a common vision, something missing these past fifty years.”

Whether you agree with Deahl’s political views or not, the anthology is a significant volume of Canadian work to be read and celebrated.

Check out the launch events scheduled so far:

Tuesday, MARCH 26 in TORONTO: A. F. Moritz, Toronto’s new poet laureate (and a TAMARCKS contributor) opens the first TAMARACKS anthology celebration with a reading followed by an open mic for contributors, 6:30 to 8 p.m. at the Parliament Street Branch of the Toronto Public Library, 269 Gerrard Street East.

The Hamilton celebration at the Artword Artbar is one of eight celebration events scheduled so far in Ontario.

Thursday, APRIL 18 in HAMILTON: Nine local and out-of-town contributors to TAMARACKS and/or the international LUMMOX Number 7 anthology will read their work, 7 to 9 p.m. at The Staircase, 27 Dundurn Street North.

Wednesday, APRIL 24 in TORONTO: Eight local and out-of-town contributors will read their work, 6 to 8 p.m. at the Main Branch of the Toronto Public Library, 137 Main Street. 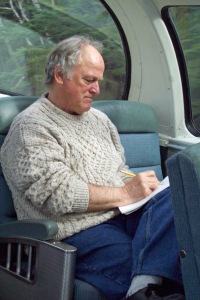 Ottawa poet Blaine Marchand is one of several guest readers who will be travelling to Toronto and Sarnia to read his work. 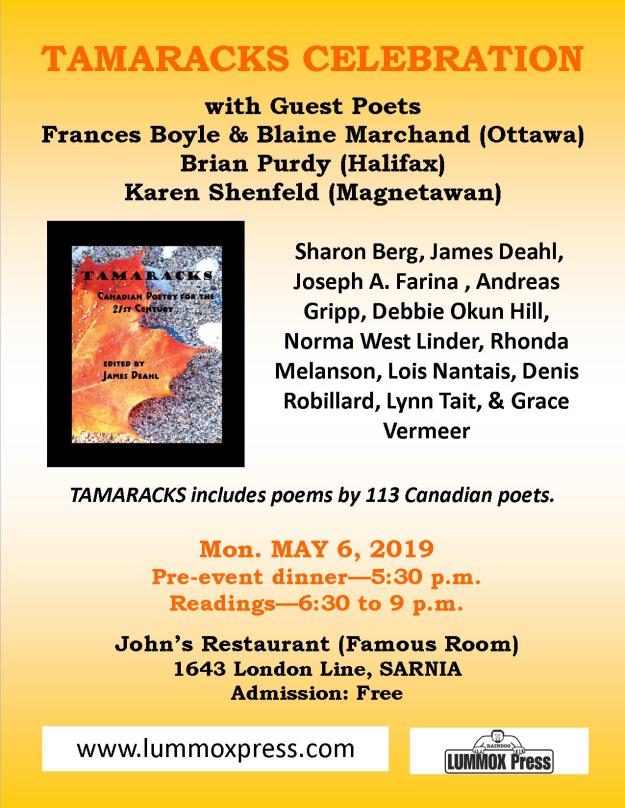 Sarnia’s May reading represents the last celebration in the spring 2019 season. More readings are being considered for the autumn.

Admission to all of the events is FREE.

For seven years, Lummox Press has published an anthology focusing on American and international poets, interviewers, and short fiction/article/review writers. The press also publishes other books by individual poets and authors including two of James Deahl’s books To Be With a Woman (Lummox Press 2016) and Unbroken Lines: Collected Poetic Prose (1990-2015) (Lummox Press 2015).

This autumn, over 150 contributors including twenty-three Canadian poets were featured in the 222-page international anthology LUMMOX Number 7 edited by RD Armstrong. Some of these Canadian contributors will also be sharing their work during the above TAMARACKS readings.

Other Canadian contributors are: Bernice Lever from British Columbia and D. A. Pratt from Saskatchewan.

Do you have poems, prose, and/or artwork that are needing a home? Submissions to LUMMOX Number 8 (to be edited by RD Armstrong with an October 2019 release date), will be accepted from April 1 to 30, 2019. Additional information can be found here. 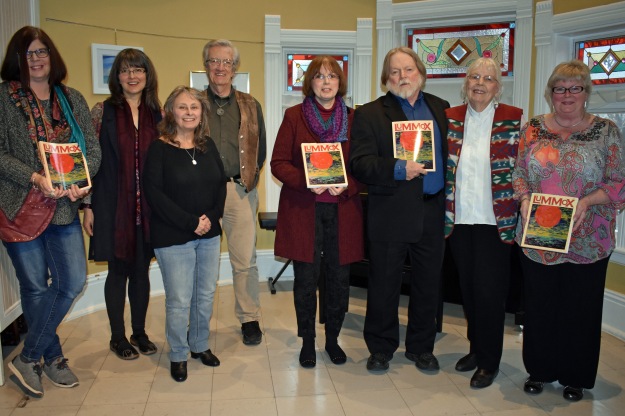 The 2018 launch of LUMMOX Number 6 at the Lawrence House Centre for the Arts in Sarnia.

Additional articles about TAMARACKS as well as the Canadian launches of other Lummox Press anthologies can be found in several locations on this website. Check it out here.

FOLLOW THIS BLOG FOR FUTURE LITERARY HAPPENINGS IN ONTARIO LISTED ON THE EVENT PAGE.

5 thoughts on “Launching TAMARACKS – Canadian Poetry for the 21st Century”