Call it a poet’s memory box of many things! Using the catchy but familiar title Cabbages and Kings, Canadian writer Norma West Linder giftwraps 50 of her best poems written between 2012 and 2019 and presents them in a beautifully written book recently released by Aeolus House. This is her 16th poetry collection and the first one since Adder’s-tongues, her 1969-2011 selected works, was published by the same publisher in 2012.  It’s quite an achievement considering Linder is now in her nineties with no sign of retiring anytime soon. 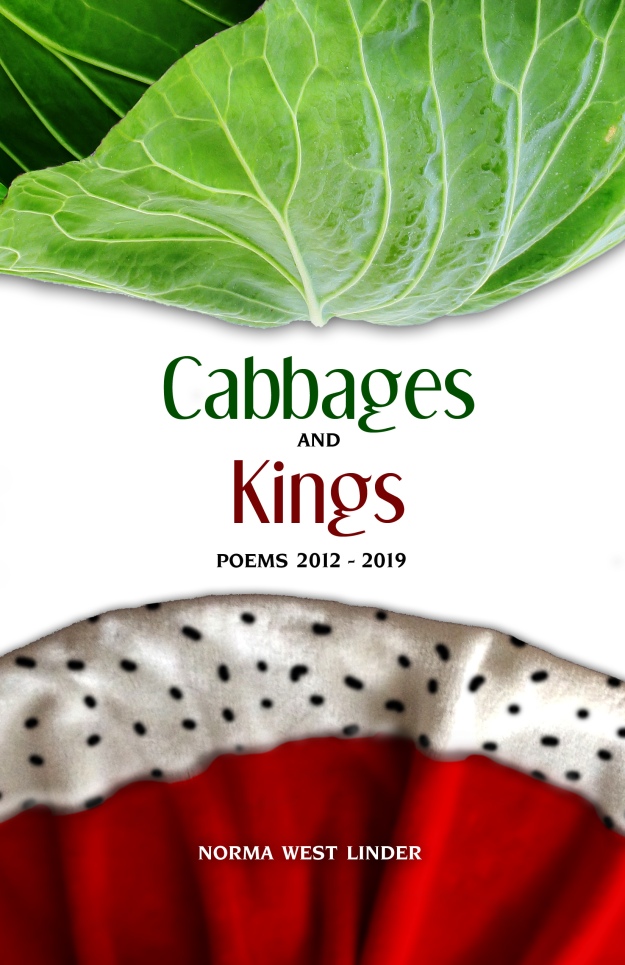 Fans of her work will be delighted with her familiar narrative and accessible verse written in the people’s poet tradition. Over the years, Linder has published novels, a biography, a one-act play, a memoir, and work for children so it is common to see some storytelling techniques incorporated in her poetry.

For example, the attractive softcover book opens like a fairy tale with the Lewis Carroll quote “The time has come,” the Walrus said/“To talk of many things:/-Of shoes and ships – and sealing wax—/Of cabbages – and Kings…”

Linder does indeed speak “of many things” from fame and royalty to farming and down-to-earth living. Like a time capsule opened to reveal stories and significant images of the past, the 82-page book is organized into five sections reminiscent of neatly-bound and themed albums.

Cabbages: A Cavalcade is a chronologically dated section with poems parading smoothly from 1925 to 2018. It begins with a reference to the 1920s novel So Big and how the protagonist proves that “cabbages are beautiful”. (p. 15) From serious subjects such as Feminism, the Dionne Quintuplets, and a 1939 Royal Visit to the humourous poems about multi-party lines and men urinating in sawdust, expect to be entertained. Hockey poems and poetry about lost lovers and mother/children relationships are also included.

Eye-witnessing shares first person childhood memories of falling off a bike, as well as reflections on being a bottle inspector, coping with a friend’s infant’s death, her mother’s teacup collections, and shopping for a long-term care facility.  More memories include a recent honeymoon plus scenes from fireside poetry readings, concerts, and happenings on the beach.

Several of my favourite lines are published in the poem “Peace Concert at Crystal Beach” where “this man from Oklahoma/– ex-farmer, trucker, bank robber/slides a piece of Laurentian Shield/across the strings of his guitar/and sings the blues.” (p. 56).

Interlude demonstrates Linder’s more playful, surreal, and imaginative side. The first poem “Assignments for the Celestial Art Show” begins with “It’s Wild Kingdom time/in Heaven’s Workshop./St. Peter’s passing out acrylic tubes/assigning animals to fitting artists” (p. 61) This is followed by Linder’s longest offering “The Seven Deadly Sins”: a seven part poem on four pages which deviates from her standard one-page verse. This particular portion is darkly themed with some hints of satire mixed in. For example, under the sub-head “Greed”: “We must eradicate these lower forms of life”. (p. 65)

Flashes is the title of her last segment, a star-flashed celestial weaving of emotions surrounding childhood memories of winter sleigh rides and summer swimming, photographed reflections, old-age, death, and even life after death with such questions as “Do we have souls/that rise/when our bodies die?” (p. 76)

Overall, the strength of the collection stems from Linder’s confidence and years of experience as a professional writer.  She easily moves between free verse and the more formal rhyming poems such as the sonnet and the villanelle.

Similar to the contrasting colours of the green cabbage and the red regal robe on the book’s front cover, Linder’s poetry plays with opposing emotions to demonstrate how laughter and tears, celebration and disappointments are intertwined to create a balanced experience and collection.

There is beauty in Linder’s solitude with all her inner reflections as she wrote in her poem “Alone at the Holiday Inn” – “a zillion rainbows/for my eyes alone.” (p. 74) In her closing poem “Joy Remembered, Still a Joy” – “How fleeting/those sweet summers/of our youth/How lucky now/to still remember them” (p. 77)

How lucky to know–to read–the work of such a grand poet like Linder who is still willing to share her evolving wisdom with the next generation of poets and readers.

Copies of her new book Cabbages and Kings are available from the author (  nlinder   (at)   cogeco    (dot)    com  ) as well as the indie bookstore The Book Keeper.