“All summer was heat/in steaming reflections/warm beads of sweat imitated the rain,/pretended to nourish grass and birds,/found shade in tired branches.” – I. B. Iskov*

I have never been to Greece but last Sunday (August 19, 2018) I could almost imagine the waves lapping the shores of the Cyclades, the whispers of Greek gods and goddesses, and the serenity of poetic blue skies over whitewashed structures. 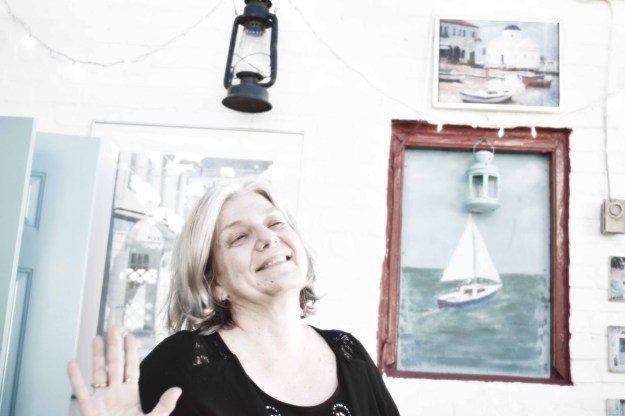 Founding member/treasurer I. B. Iskov celebrated her birthday at The Ontario Poetry Society’s Sultry Summer Poetry Gathering held Sunday, August 19, 2018 at Mykonos Restaurant. Half way through the program, baklava (a rich sweet dessert pastry) was served.

What a dreamy place for members of The Ontario Poetry Society (TOPS) to share poetry on the breezy outdoor patio of Mykonos Restaurant in London, Ontario, Canada. Not only did the scent of Greek food and the turquoise seaside-themed décor add to the ambience but Heidi, the co-owner, showed her support for The Sultry Summer Poetry Gathering by applauding loudly.

What a celebration it was!

END_OF_DOCUMENT_TOKEN_TO_BE_REPLACED

“Denis Robillard celebrates water…(His) poems fill the cup and the bowl. They slake the thirst of all who thirst for poetry…”

~ John B. Lee, Poet Laureate of the City of Brantford and of Norfolk County*

Early morning rain tap-dances against the window pane. This rhythmic thrum and translucent shower reminds me of Canadian poet Denis Robillard and the blue-gray drenched cover of his first poetry collection The History of Water. For me, water, on the surface, is light on its toes, refreshing, but dive deeper and a murkier metaphor lurks in the mud-lined puddles and swirling streams. 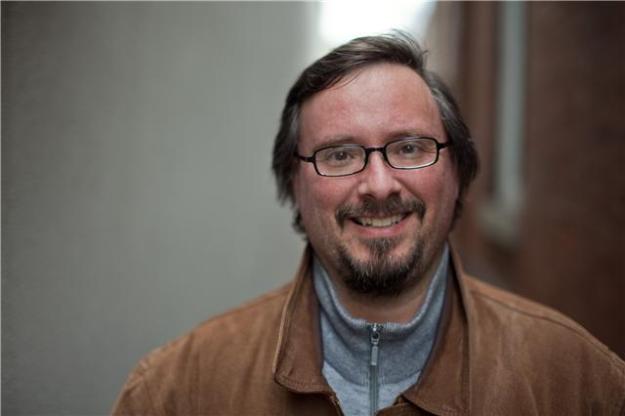 This is where Robillard wades: into his haunting memories of a near-drowning, the loss of a parent, the destructive nature of not one but two flash floods. The result is a silver lining: a first place finish in the Cranberry Tree Press 2015 Poetry Chapbook Contest for his water-themed manuscript.

According to Bruce Meyer, past Poet Laureate of Barrie, Ontario and adjudicator for the contest, “There is a very interesting sense of narrative behind these poems that is at its best when it does what I love best in good poetry: it engages something larger than itself and its subject matter…”*

Last fall to celebrate Robillard’s award-winning work, Cranberry Tree Press published his water-themed book, The History of Water. A book-signing was held in Windsor in early December, however, the official launch party will take place on Tuesday, April 26 from 7 to 10 p.m. at the Teutonia Club, 55 Edinborough Street in Windsor, Ontario. 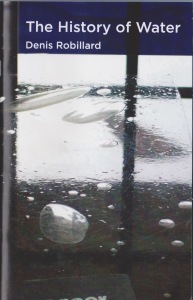 The History of Water by Denis Robillard was recently published by Cranberry Tree Press in Windsor, Ontario.**

This National Poetry Month event will also include the launch of contest finalist Songs of Zambia by Rosalind Knight plus two other books: winner of the 2015 Cities of the Straits poetry contest smack in the middle of spotlit obvious (Farmhouse Press) by Laurie Smith and Curious Connections (Farmhouse Press), an award-winning short story collection by Karen Rockwell.

Robillard is no stranger to the Canadian literary scene. For the past 15 years, several hundred of his poems have appeared in the small presses and on line magazines across Canada, the USA, England and Scotland. Those include: Rattle, Rampike, Word Riot, Nashwaak Review, Algoma Ink, Cliff Soundings, Sidereality, Orange Room Review, Dusty Owl, Ditch, Windsor Review and many more. Robillard’s poems were also featured in An Unfinished War, a Black Moss Press anthology about the War of 1812. Born in Northern Ontario, he now teaches high school in Windsor, Ontario. He is also an avid photographer and traveler.

Several weeks ago, I asked Robillard to share his thoughts about his writing process. Below is his response:

Many of the poems in The History of Water touch upon my father’s death and my mom’s subsequent flood experience. (In the Fall of 2013, two flash floods in the same month virtually wiped away her home, belongings and dignity within days. It was like the final nail in a floating coffin.) Hence the idea of water rushing in and washing over our fragile lives. It seems like water has been the one true constant metaphor or archetype running through my poems. By the time I turned around I had written more than 40 “water based’ poems. Surely enough for a collection. I nearly drowned twice as a child, so again those images and experiences welled up to the surface and found their final form in these poems.

After completing my manuscript, my next step was to shop them around. I sent these out to 3-4 publishers in 2013-2014. No dice. No movement. I stumbled across the Cranberry Tree Press manuscript contest in the spring of 2015 and quietly crossed my fingers and held my breath for results. I was not expecting anything big to happen. I was just exercising my poetic spirit by pushing a few poems out the door. Low and behold I won the contest and it was a real kick in the pants. It helped me formulate a game plan for the next chapter of my life. Once those poems had exorcised themselves, I started from scratch again. This is where today finds me.

I’ve always written, it seems. It started back in high school when I lived in Sault Ste Marie. I was part of the yearbook staff in high school so was able to slip in a couple of poems under the radar and get them published. In 1981 my parish priest caught wind that I had been writing “spiritual poems” so I offered up one of my journals to him to glean over. He read them through giving me high praise for my imagery and content.  He then published a few of those poems in the weekly church bulletin. Coupled with this love of writing was the instinctive love of reading. I was a voracious reader as a child, when in fact, my parents were scarcely ever seen with any books in hand. My interests flourished. From science to the supernatural, to spiritual and the panoply of biographies.  Again mostly poetry and biography were the mainstay.

I digested most of the Canadian pantheon by the time I left high school – Layton, Purdy, Waddington, Service, Atwood, Louis Dudek and many more. I got to meet Irving Layton at a school function in 1982 and his poems galvanized me.  At the tail end of high school, I wandered south with my cherry picking of books and took on some mild affectations with the Beats and Bukowski. More modern stuff entered the mix too. 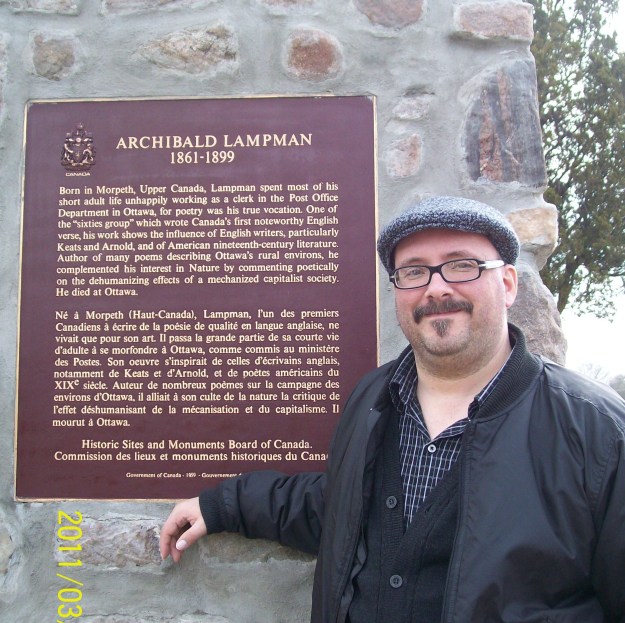 Robillard feels “inspiration comes to the writer in various ways and incarnations.”**

In 2000 I moved to Windsor to pursue my teaching career. I would say that the motor city consciously or unconsciously got my poetry engine fired up on all fours. In Windsor I began to participate in the poetry community. I read at pub nights, was invited to read at university and took a more active role in the poetry community. I met some great people like Marty Gervais, Dan Wells, Gustave Morin, Vanessa Shields, Sal Ala, and many more who were a creative lot and very supportive. In 2002, I discovered Brantford poet John B. Lee and a vigorous correspondence ensued. An open line of communication was shunted open, one which still ensues to this day. He was another lightening rod or galvanizing point in my writing. My style changed of course over the years. Subjects matured and broadened. My reading tastes were also seasoned by more veteran writers. The Windsor Bookfest, opened my eyes to new and emerging writers on the scene like Steven Heighton, Stuart Ross, Jason Heroux and many more. I had essentially become hooked.

Inspiration comes to the writer in various ways and incarnations. Mostly, unexpected, aleotoric ways. It could be something as simple as watching a cardboard box dipsey-doodle cavort and ballerina step its boxy self along a sidewalk or into oncoming traffic. Like seasoned rubberneckers we have an impulse to look and watch, to see what happens to the bouncing box in traffic. It seems to be propelled by some life force a benevolent poetic hand pushing it along.

A poem comes in the shape of a placid landscape imbued with morning light. The tender generator hum of cricket circuitry, the metronymic cicada rhythm of our breathing. Poetry is the shuffle of words caught in the act of remembering. Your thoughts rising above the smoke of the hills. The way you catch the sunburst in your loins, like a sugar maple swizzle stick. How sunlight floods through the cathedral of your bones. Insects making Morse sounds. Your eyes catching a bird’s stroboscopic shadow for the first time and you image to capture them onto paper.

It is the scrawl of a few tentative words on paper. Something seeking shape. A final varnish against fate. Damage control implemented across the universe with a sea of ghost faces parading in the Grand Abstract mode.

You sit by a pond soaking it all in. Write a few words then meditate upon them, sky, rain, earth, clock, eyes. Then looking through those false starts and aborted lines like a rag picker you re-examine those discarded pieces.

It comes in the guise of the skin of a building. Le Chien D’or. The castles of the Rhine, how they looked and felt under a prism of time. You seek to capture the one true essence, the zeitgeist of it and how it parades through the weathers of time.

Additional information about Cranberry Tree Press as well as the shortlist of the 2015 Poetry Chapbook Contest finalists appear here.

*John B. Lee’s quote and Bruce Meyer’s statement appear on the back cover of The History of Water (Cranberry Tree Press, 2015) by Denis Robillard. Reprinted with permission from the publisher and creators.

**All photos courtesy of Denis and Joyce Robillard.

“An amazing array of poetry from nearly every state in the union and five countries from around the world.” – RD Armstrong, Editor-in-Chief, LUMMOX Number Four

“Is it a bad thing if a Canadian poet is influenced by an American Poet?” and “What is a Canadian poem?” Those are two questions prolific Canadian poet James Deahl asked in his essay “A Canadian Poem, Eh?” published in LUMMOX, Number Four. Readers of the 224-page poetry anthology released last month by LUMMOX Press in San Pedro, California may soon find out. 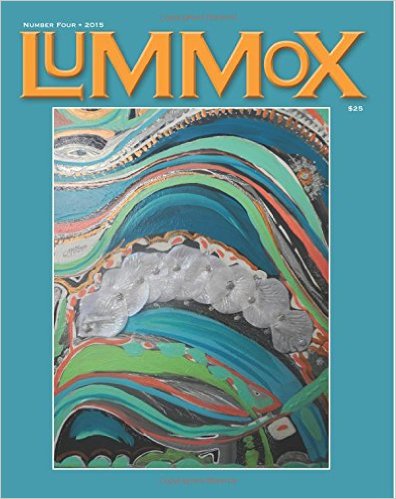 LUMMOX Number Four features 160 poets. Over ten percent of the contributors are from Canada.

Edited by American poet RD Armstrong, the book features the work of over 160 poets from 46 of the United States, Canada, the U.K., Albania, Denmark and Sweden. It includes three interviews, five essays and a few reviews plus the poetry of the 2015 Lummox Poetry Prize Winner, H. Marie Aragon and the runner ups Nancy Shiffrin and Cynthia Stewart. Thanks to Deahl and his efforts to promote Canadian poets to the American market and his national sharing of the LUMMOX anthology submission calls, a strong representation of southwestern Ontario writers are featured in both the LUMMOX Number Four and Number Three anthologies.