I’ve learned to listen with my eyes. – Donna Langevin*

Try it! Listen with your eyes! If you read the back cover of The Banister Volume 34, an Ontario poetry anthology launched October 26, 2019 by the Niagara Branch of the Canadian Authors Association (CAA), you will be transformed by Donna Langevin’s award-winning and heart-felt words.

For example, imagine what it would be like to have trouble hearing: “I’ve lost the inner ear within my ear, the sea of sounds once filling up its shell – cathedral bells…echoes in the belfry.”  Such lines introduced her poem “Even With the Help of My Hearing Aids” which won first prize in the CAA’s 2019 poetry contest. 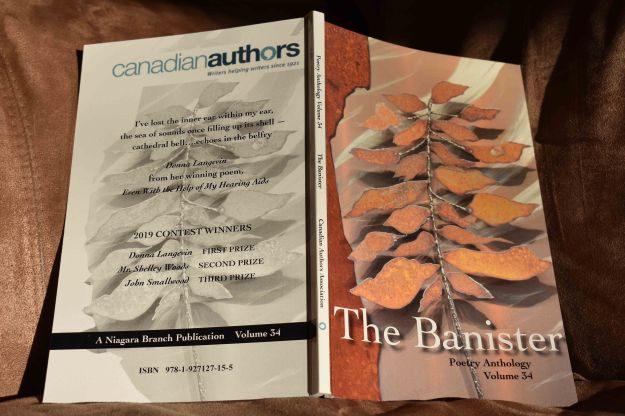 Congratulations to Toronto poet/playwright Donna Langevin who won first prize for her poem “Even With the Help of My Hearing Aids”.

It’s a poignant piece and contest judge Bruce Meyer praised it highly. In his comments (p. ix and x) he wrote that Langevin’s first place creation is “a beautifully crafted poem…The poet has a wonderful idea of what constitutes a poetic line, and within those lines, the poem connects, not by paltry simile but through the unison of image and language.”

Meyer also stated that “language [in a poem] should engage both the ear and the eye”.(p. ix)

Langevin’s work certainly does that and this poet has a habit of winning contests. One of her humourous poems, “The first time”, received an honourable mention while two more of her poems were also selected for the same anthology.  Two years earlier, she won second prize in the CAA’s 2017 Banister contest and in the 2014 GritLIT contest, plus she was short-listed for the Descant Winston Collins Prize 2012.

A few days ago, I chatted with Donna (via e-mail) about her recent win, her poetry books including Brimming (Piquant Press, 2019), her writing space, and her plans for the future.