October 2018 is Canadian Library Month and today during Ontario Public Library Week, I applaud the creation of all the libraries I’ve visited including several across the country in other provinces. As the celebration poster states, “A Visit Will Get You Thinking”. 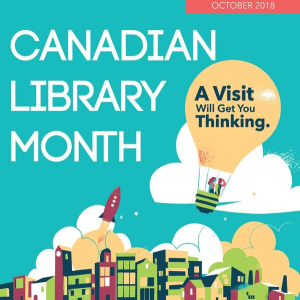 This Monday at a southwestern Ontario library branch, I received a pink papered heart and was encouraged to write down why I valued public libraries. Yes, it got me thinking as my mind drifted over the Ontario-Manitoba border towards a “Not-so-little library on the prairie”.*

During my childhood on the prairies, one of my goals was to read every book in our house including my parent’s collection of Reader’s Digest and a musty 1926 – 24-volume set of encyclopedia entitled The Book of Knowledge. In the winter, I would hibernate with second hand novels in my bedroom. In the summer, I would sit in a tree in our backyard and devour each paragraph and chapter until it was time for supper.

However, when the family’s limited supply of books was depleted, I turned to the local high school where part of the community library’s holdings were shelved in a temporary space. Despite not having a permanent home, these books opened up new worlds for me and once again I vowed to read every word ever written. (I’m still working on that!)

Oh, how our libraries have evolved: a gathering place for like-minded souls.

If books are friends then libraries are safe places filled with unique experiences and personalities. One of my joys of travelling is to stop at a neighbourhood library and explore the local history and culture. I can often predict what a city or town or village is like from the book treasures stored on its library shelves.

A warm welcoming place for the community!

Some have become community centres listening to the patron’s needs by offering programs and services unheard of before….like knitting classes and Lego building groups for children.

END_OF_DOCUMENT_TOKEN_TO_BE_REPLACED

The Poet Laureate of the Great Canadian PoeTrain Tour (D.C. Reid) sits by himself at the Toronto Pearson International Airport. His carry-on bags surround him as the morning light opens her eyes. Soon, other PoeTrainers join him as they gather for their flight to Winnipeg. I reflect, glance at my watch, and scan the sea of travellers for a poet-friend who hasn’t shown up yet. 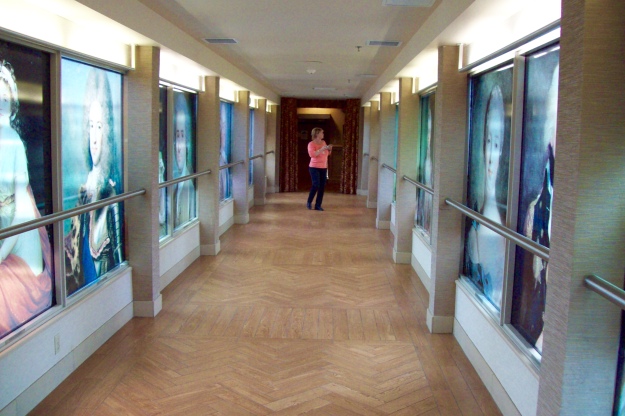 This is where my PoeTrain journey begins: at an airport not a train station. 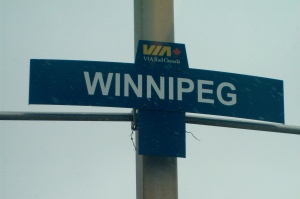 When VIA Rail officials suspended passenger rail travel from Toronto to Winnipeg due to an earlier derailment in northern Ontario, organizers of the Great Canadian PoeTrain Tour were left with a dilemma. We yearned to embrace train travel but would the tracks open up in time for the National Poetry Month tour from Ottawa to Toronto to Edmonton to Vancouver and proceed as planned? And if not, how could onboard events be re-scheduled? 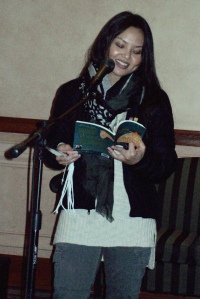 Within weeks of travelling, PoeTrainers opted to cash in their Toronto-Winnipeg  train tickets to book flights to Winnipeg where train travel could safely resume.

I secretly welcomed this change. Although I had been looking forward to travelling through northern Ontario (which I love), I also have a soft-spot for Manitoba and its inhabitants. Despite the sub-zero weather in the winter and the mosquito-threats in the summer, this Canadian province houses the warmest and friendliest people.  Even their license plates smile with the slogan “Friendly Manitoba”.

The PoeTrainers rejoiced. The folks at the Fort Garry Hotel offered a reasonable room rate for the out-of-town guests and bonus: a glitzy place to celebrate National Poetry Month.  Several Winnipeg poets and musicians shared in the festivities.

Drek Da and the Low Flying Gurus were special guests at the Winnipeg event.

The rest is history! According to organizer David Brydges, “The Great Canadian PoeTrain Tour (Ottawa to Vancouver – April 15 to 26, 2015) was a great success.”  See his report here.

League of Canadian Poet Marsha Barber launches her book All The Lovely Broken People (Borealis Press, 2015) thanks to an Canada Reading Tour grant.

Were you there in the crowded room, a poetic voice in Salon A?

Did you learn to roll, catch the flow, when some plans derailed?

Did you bring an extra sweater when snow clung to unopened bags?

Did you linger, wave goodbye as the Monday train departed?

Follow this blog for additional posts and highlights of the Great Canadian PoeTrain Tour.

Can’t wait to return to the friendly province! If you’re in Manitoba, check out this writing workshop “Exploring the Five Senses” scheduled for Thursday, May 21 at the Gaynor Regional Public Library. Prior writing experience is not necessary. See details here.

Poets will also be attending the joint League of Canadian Poets/Writers’ Union of Canada conference held in Winnipeg May 28 to 31.

Also check out the Envoi Poetry Festival (May 29 to June 5, 2015) for more poetry readings here.