As a young boy, David D Plain remembers sitting with his grandfather on a veranda in Sarnia, Ontario and feeling the “awesome power” of Nimikiins or Little Thunder, an Ojibwa War Chief who was also his grandfather’s great-great-grandfather. This vivid childhood memory comes alive in “Rendezvous with an Ancestor”, one of 43 poems in Plain’s newest book Poems from an Eclectic Mind published earlier this spring by Trafford Publishing. 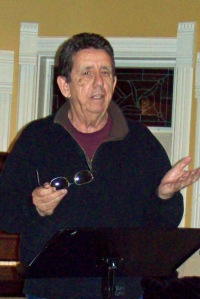 His non-fiction book The Plains of Aamjiwnaaang won a Golden Scribe Award in 2008 and was short listed for an Eric Hoffer Award in 2014. Two other non-fiction books (Ways of Our Grandfathers and From Ouisconsin to Caughnawaga) plus his historical fiction 1300 Moons have also won Gold Seals for Literary Excellence and were nominated for an Eric Hoffer Award. All four books were reviewed by the U.S. Review of Books.

His interest in history and culture is also evident in his debut poetry book where he touches on such indigenous themes as an Ojibwe creation story told in tercet form, a cinquain with an echoing Sioux expression “hoka hey”, a rhyming narrative about a windigo from Ojibwa folklore as well as references to an Ojibwe sweat lodge. However, non-indigenous themed works like “Limericks in Honour of John” are also featured.

Many of these traditionally-formed poems stemmed from assignments provided during weekly workshop meetings of Writers International Through Sarnia (WITS), one of several local writing groups in the Lambton County area. 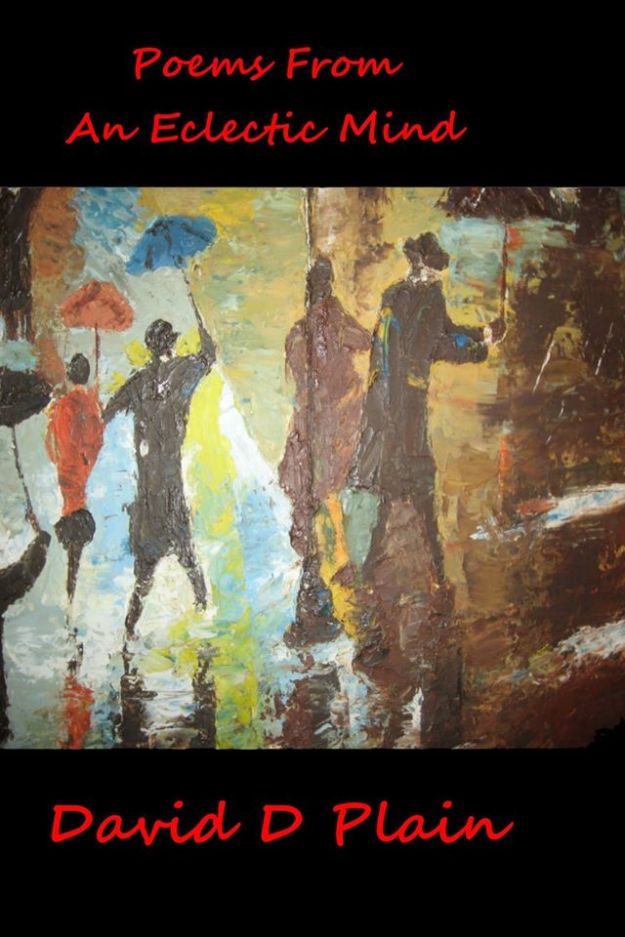 As a new poet, Plain takes risks and jumps in with confidence. As he revealed in the book’s preface: “In the spring of 2014, I was challenged to write a poem around a specific word, nemophilist. I had never written a poem, indeed I didn’t think I could. But, always up to a challenge I accepted and the result is in this work.”**

Plain’s work embraces his willingness to experiment and to try different styles including a concrete poem “Thirteen Essential Literary Terms” written in the shape of an umbrella. The front cover carries a surreal streetscape “Paris in the Rain” oil painted by Plain’s mother, Helen M. Coghill.

As shared on the back cover of his book:

“Eclectic and electric with ‘thunderous cracks’ of a summer storm!…Plain opens his literary umbrella to slosh and play in the poetic puddles and rhythmic-rhyming landscapes of his debut collection! Daring and exploratory through an ‘indigenous lens’, his literary trek reclaims such universal themes as passion, spirituality, ‘quasars and quarks’ nature’s ‘gurgling spring swirls’ and ‘past paradigms’. “

Promotion for his new book has already begun.

Earlier this month, Plain was one of three featured poets at Sarnia’s First Friday launch of LOCAL: Curated Art Show and Mural Project.http://localsarniashow.wix.com/local

In early May, he read with two other indigenous writers (Charmaine E. Elijah and Gloria Alvernez Mulcahy) during the London Open Mic Poetry Night in London, Ontario. Additional information: http://www.londonpoetryopenmic.com/may-4th-2016-photos-and-summary-featuring-indigenous-poetry.html

As a new member of The Ontario Poetry Society (TOPS), Plain will have a mini spotlight reading at The Sultry Summer Poetry Gathering, Sunday, August 21 starting at 12:30 p.m. at Mykonos Restaurant in London, Ontario. More info: http://www.theontariopoetrysociety.ca/Poetry%20London%2016.html

(1) You have written several historical based books. What inspired you to switch your writing focus to poetry?

I didn’t really change my focus, but more expanded my horizons. I am still writing history, but I now also write poetry for r&r (rest and relaxation). I was challenged to write a poem a couple of years ago and I took up that challenge, although I didn’t think I was capable. I found not only was capable, but I found writing poetry relaxing. 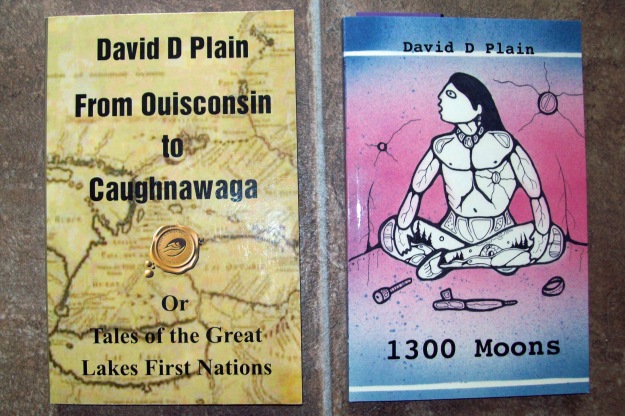 David D Plain is the author of five books: three non-fiction, one historical fiction and his latest a college of poetry Poems from an Eclectic Mind.

(2) Today’s contemporary poets often write in free verse format but your book focuses mainly on more traditional closed forms with end rhymes.  Explain why you prefer to work in these older forms.

I prefer rhyming forms of poetry, because of the challenges they present. For example, the sonnets I write must have 14 lines consisting of rhyming couplets and ten syllables per line. I just find the stricter form more fun to try to accomplish, although, I do write some free verse.

(3) Which is your favourite poem in your new collection and why do you like it so much?

My favorite poem in my new collection is “Death’s Sudden Embrace”. It’s a love sonnet. It takes place in World War II and the two lovers in it are my parents, so it’s very personal.

4) Describe your writing process. For example where do your ideas come from and what do you do to turn that idea into a poem? Also do you write long hand or compose on the computer? What time of day/night do you like to write?

Often my writer’s group is given an exercise to try involving the writing of a poem using a certain form and/or a particular topic. Other times I select a topic from a list of writing prompts or sometimes my muse inspires me. I never write longhand, but type directly into my word processor. My most productive time is in the mornings so that is when I set aside a block of time to write.

(5) What are you currently working on? 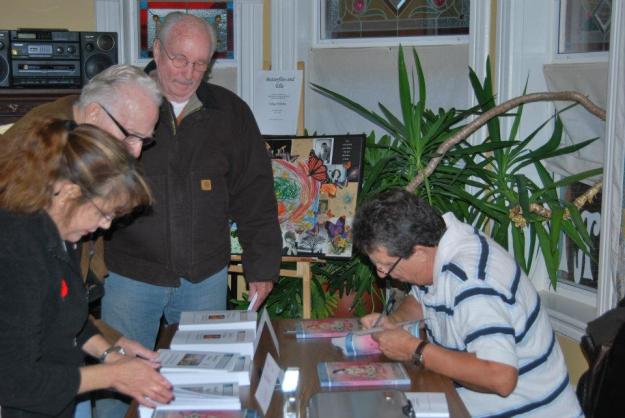 Plain’s historical fiction book 1300 Moons may be turned into a TV drama series. A screenplay for the pilot episode has already been written.

I am currently working on a sequel to my historical fiction 1300 Moons. I am also involved with an ongoing TV drama series based on that novel. I co-wrote the screenplay for the pilot episode and it is currently being shopped around by the film production company. I am also working on a book on Saugeen history. It is non-fiction and I have about 50 pages written so far. All the while I continue to write poetry during my down time, as I stated earlier, for r&r.

(6) A week ago, you mentioned a new history group project that you are involved in. Could you expand upon that?

Yes, I belong to the Aamjiwnaang Heritage and Culture Club here on the rez (the local reservation). We have decided to publish a history of Aamjiwnaang. It is a collaborative effort by the club’s members. Individual community members will be interviewed with the taped interviews transcribed into oral histories of the community. At least that’s how it’s starting out!

(7) What are your future goals as a writer?

My immediate goal is to finish the sequel. The working title is Honorable Decent. I also plan to be more involved in writing screenplays. When I have enough of a collection of poems built up I will probably publish another poetry book.

Thanks David for the interview. I wish you continued success with all your literary projects. 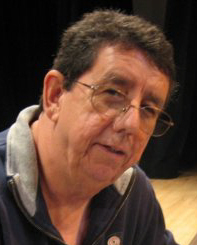 Another author profile on Plain appears on the “Writers Networking” section of Gloria Pearson-Vasey’s May 23, 2015 blog post: http://www.gloriapearsonvasey.com/writers-networking-david-d-plain/blog.

National Aboriginal History Month was created and officially declared by the Canadian House of Commons in 2009. The celebration takes place each June to “honour the heritage, contributions and cultures of First Nation, Inuit and Métis communities across Canada. Canadians are also invited to celebrate National Aboriginal Day on June 21st of each year.”

*from the poem “Rendezvous with an Ancestor” published in the book Poems from an Eclectic Mind (Trafford Publishing, 2016) page 66. Reprinted with the author’s permission: Copyright ©2016 David D. Plain

Watch this blog for additional Canadian Author and Poet Profiles.