Gonna kick up these old heels/Swing on that shiny pine floor/Stamp feet to that drum beat./Oh, find some lovin’ galore* – Bernice Lever

You won’t find Canadian poet Bernice Lever resting on her laurels in an easy chair. Even at the golden age of 80 plus years, she’s much too busy for that. 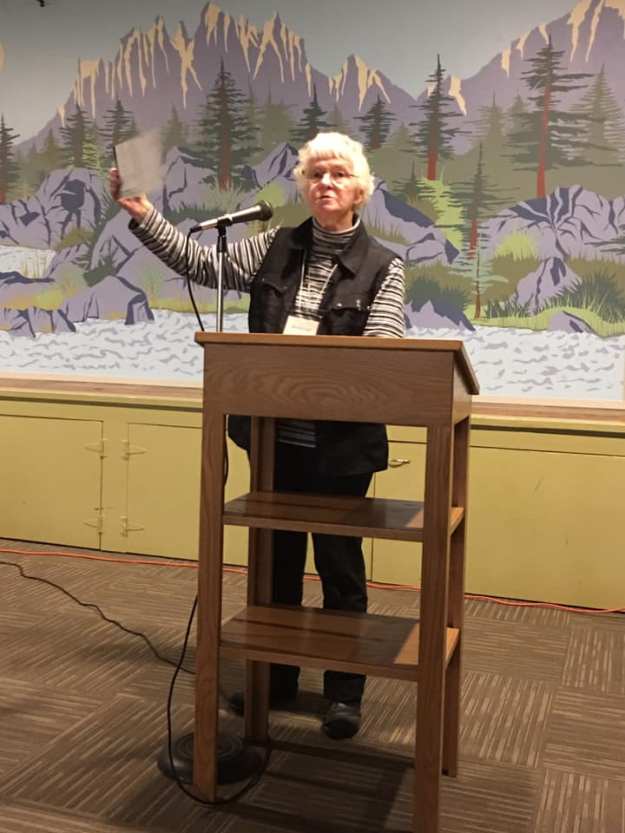 In addition to working on her 11th book of poetry expected to be published in 2019, she is still giving readings and workshops. Earlier this month, she was one of six Canadian and 31 American poets to read at the World Peace Poets 6th Read-In in Bellingham, Washington.  Two of her poems featured at that event will be published in a December chapbook.

Lever is one of 113 Canadian poets from Halifax to Vancouver published in TAMARACKS: Canadian Poets for the 21st Century (Lummox Press 2018)

In April, the League of Canadian Poets highlighted her poem “Not Just My Bunions” for Poem In Your Pocket Day. (Read more here.) Plus one of her poems was selected for Poetry Pause the League’s new on-line showcase to be launched this November.

Recently, she was welcomed to share her praise of her multi-talented publisher, Marty Gervais and of his five decades of leading Black Moss Press and his national prize winning literary magazine. This coming book is edited by well-known writer Bruce Meyer.

Bernice Lever has made such an extensive contribution to the literary community that several organizations including the League, the Canadian Authors Association, and The Ontario Poetry Society have honoured her with Life Memberships.

I recently chatted with Bernice about her literary life, philosophy, and future goals.

END_OF_DOCUMENT_TOKEN_TO_BE_REPLACED

A poet’s husband once won a trip for two to St. Lucia. I call that luck! For me, buying a lottery ticket is like throwing cash into a burning roulette wheel. It’s a waste of money unless you want to support a good cause like the Canadian Cancer Society or need a stocking stuffer or a compact gift for a friend or relative who enjoys playing bingo or a scratch version of crossword.

Let’s face it, how many of us are going to win a million dollars or a dream home during our life? What would a poet even do with that kind of cash?  Buy some exotic groceries? Quit his or her day job? Purchase more poetry books and new matching bookshelves for the office? You know I’m teasing here. A retreat might be nice, perhaps some sabbatical or retirement travelling to inspire the next book? Poets just aren’t that lucky or at least I’ve never met a poet or anyone who has taken home a sack of gold coins.

I will, however, gamble or (in softer terms) take a chance with poetry contests. Below are a dozen reasons why I believe entering literary competitions can be beneficial for a writer. Keep in mind, there are also drawbacks and some writers may have varying opinions based on his/her own experiences and viewpoints. I welcome your thoughts and feedback.

Poetry Contests: Should we even call it gambling? Absolutely not!

What are your reasons for entering or not entering a contest? Feel free to leave a comment or share this posting with your literary community.