Gonna kick up these old heels/Swing on that shiny pine floor/Stamp feet to that drum beat./Oh, find some lovin’ galore* – Bernice Lever

You won’t find Canadian poet Bernice Lever resting on her laurels in an easy chair. Even at the golden age of 80 plus years, she’s much too busy for that.

In addition to working on her 11th book of poetry expected to be published in 2019, she is still giving readings and workshops. Earlier this month, she was one of six Canadian and 31 American poets to read at the World Peace Poets 6th Read-In in Bellingham, Washington.  Two of her poems featured at that event will be published in a December chapbook.

Lever is one of 113 Canadian poets from Halifax to Vancouver published in TAMARACKS: Canadian Poets for the 21st Century (Lummox Press 2018)

In April, the League of Canadian Poets highlighted her poem “Not Just My Bunions” for Poem In Your Pocket Day. (Read more here.) Plus one of her poems was selected for Poetry Pause the League’s new on-line showcase to be launched this November.

Recently, she was welcomed to share her praise of her multi-talented publisher, Marty Gervais and of his five decades of leading Black Moss Press and his national prize winning literary magazine. This coming book is edited by well-known writer Bruce Meyer.

Bernice Lever has made such an extensive contribution to the literary community that several organizations including the League, the Canadian Authors Association, and The Ontario Poetry Society have honoured her with Life Memberships.

I recently chatted with Bernice about her literary life, philosophy, and future goals.

Thanks Bernice for taking time from your busy day to chat about writing. Let’s start with your philosophy. On your website www.colourofwords.com, you stated that “structure and form add clarity and creativity to our thoughts. Both music and message – even fun/pun – of words delight” you. You are “interested in idiomatic and/or conversational language rooted in the images of the 5 concrete senses to compress life’s experiences and emotions to lyrics that illuminate.” Why are these concepts so important to you?

The sounds, words and music of our first dozen or even 20 years [of our lives] have a major effect on our personalities.

In fact, music of songs and rhythms are an international language that most children learn before words.

Plus idiomatic / conversational / even slang language of an era or generation is true to that time and those people. Even each sibling in a family has variances with each other.

I try to be aware of my surroundings in sounds, smells, tastes, textures, and colours and shapes. Noticing details stops too much replaying of past memories — especially negative ones over and over. Memory is not a problem solver. Awareness of the NOW and creativity can solve much.

Learning to live in PEACE or not, happens in a family or close knot setting LONG before one gains a university degree or even a paying occupation.

Your work including your poetry is indeed accessible and easily understood by the general public. Often, you inject humour in your work. In the anthology EnCompass 1, the poem “Momma’s Goin’ Dancin’ Tonight” has a unique rhyming scheme. The first verse has an ABCB pattern followed by AABB, then ABBA, and ABAB. A chorus bridges all the verses together. The majority of your work is in free verse form but you’re not afraid to write and publish rhyming material. How do you decide when a poem requires a rhyme or when it should be expressed in free verse?

A poem chooses its own form! Mainly I use internal rhyme or repeat sounds to unify a poem. As a poet, I find poems come to me best, upon waking and sometimes I write before rising, before breakfast or coffee BUT not every day. (We all have different body rhythms to our personal creative hours!) Then I read my poems and ones by other poets, before I walk about my house reciting aloud or quietly editing any time of day. When I’m away from home, I always have a small tablet in my purse, ready for a good line. A few words can give birth to a new poem days later: let it grow roots and bloom in its own season.

In an age when family sometimes takes a back seat to work responsibilities, you’ve managed to set your priorities in such a way that family remains an important aspect of your life and your writing themes. Why does family factor so prominently in your work?

Family is the central life of all cultures. Even if one is an only child or adopted, we all have GENES from two parents and four grandparents. We are not plastic cookie cutter made—even if we live on the same block or winding road. 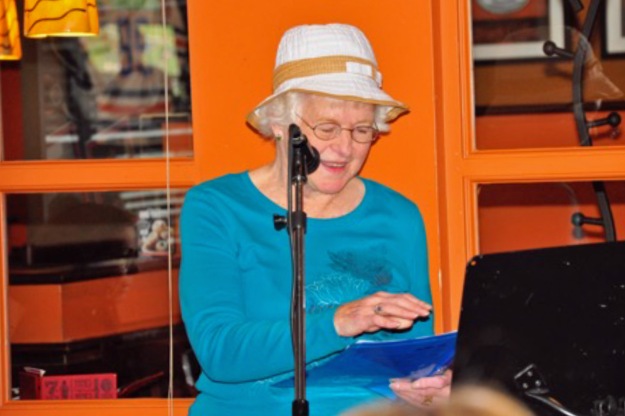 Also, I consider myself a People’s Poet. I am not an academic poet – in love with the Greek and Latin classics or other set schools of writing – I can only feel comfortable writing what I know from LIFE more than from book learning or class room lectures.

Would you call yourself a feminist? Why or why not?

I am not trendy about gender! I love men of all ages and of many types. Yet I belong to the Feminist Caucus of the League of Canadian Poets. Let’s say I support  #WEtoo – as I have always worked for equality for the sexes—- in jobs, in committees, in leaderships.

Who is your literary hero or who has influenced you the most?

My hero was an early mentor, Irving Layton—as I took two classes with him and was in the class editors’ group for our annual booklet which led some of us to start WAVES, Fine Canadian Writing, at York University from 1972 to 1987. Layton stressed honesty in emotions and to be fearless against CURRENT TRENDS to be “polite and gentle, or seem weak” – that pleased gentile reviewers.

My heroines were Dorothy Livesay, Margaret Laurence and Miriam Waddington, writers I knew from the classroom, readings, friendships, and from their books!

You have also been a role model for emerging writers. What advice would you give to a new poet interested in publishing his/her first book?

The Canadian Writers Guides, a Canadian Authors Association publication was a major support for writers in the 1990s. There’s no collection like it today. You can still find it in academic libraries. Random material and advice can also be found on the internet.

Most of all: be patient. Just ENJOY writing poems for your own delight.

What’s next for Bernice Lever in terms of your life and/or your literary aspirations?

My focus is to sort/organize my library papers—-for possible University literary archives.

My donation of 15 years of editing at WAVES: a complete collection of 45 copies—a tri-annual—is with York University archives now.

Editor Hadda Sendoo of the World Poetry Almanac has included two of my PEACE poems, a short biography and an interview with me in No. 7 to be launched this fall 2018.

I was also in the 2017 edition which features some 100 poems from over 70 countries.

Thanks Bernice for sharing your experiences and knowledge. I wish you much success with your future projects.

You are an inspiration to so many writers!

Lever is a great grandmother of three and creates poetry on Bowen Island, BC. Her most recent and 10th poetry book was Small Acts, Black Moss, 2016. (A review of that book appears here.) 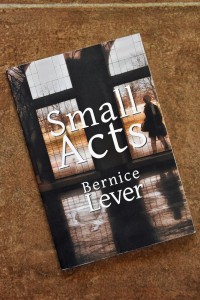 Her travels allowed her to read poems on five continents. Her English composition book (now a free PDF) is The Colour of Words.

Although she is active in many Canadian national writing organizations, she is delighted to be on the B C coast again, writing and performing PEACE poems internationally. Additional information about Lever can be found on her website: www.colourofwords.com,

As John B. Lee, Poet Laureate of The City of Brantford wrote on the back cover of her latest book Small Acts, “Bernice Lever writes beautifully of water, the ocean, the amniotic mother of all life, of the need for kindness, the deep and abiding life-sustaining quality of love, love of humanity, love for one another, love of our planets, our earth, our hydro biological future threatened by being careless, indifferent, and thereby behaving like a futureless species”.