If you stand near the ridge of Hillcrest Park in Thunder Bay, you will see him floating on his back in Lake Superior. Known as the Sleeping Giant, this land formation of mesas and sills has inspired many writers including Governor General Literary Award-winner Jane Urquhart with her fourth novel The Underpainter.

She writes, “Passengers who have travelled on the Trans-Canada train can bring his physique to mind long after mountains and prairies have faded from memory.”

From Hillcrest Park: a panoramic view of the famous Sleeping Giant. Although the Sleeping Giant Writers’ Festival is currently on hiatus, Thunder Bay has a vibrant literary community. Check out the International Festival of Authors (IFOA Ontario) to be held Thursday, November 6, 2014 starting at 7 p.m. at the Thunder Bay Art Gallery. Featured readers include Kathryn Kuitenbrouwer, Alison Pick, and Michael Winter.

It’s true. There is a haunting magic or spirit in the north and to try to capture that vast landscape through paintings, photographs, poetry or prose is a difficult task. You must stand on the granite, press the pine needle scent onto your skin and drink in the rugged waterfalls and northern skyline. It’s common to see wildlife such as bears, chipmunks, red squirrels, wolves, deer, beavers, otters, and even a lynx in your travels.

The wilderness swallows you and at some point the words flow like sap from the coniferous trees.

It’s been several years since I’ve visited Thunder Bay. At one time, it was my adopted home where I used to wander Lakehead University’s halls in my quest for stories for the AGORA, a monthly employee newspaper I edited in the mid-1980s. So many untold tales still hide beneath the rocks but last month as a poet I was most captivated by the new waterfront development at Prince Arthur’s Landing. Change stirs the emotions and I too had mixed feelings about the urbanization of the natural shoreline as I watched a mechanical crane lift a pallet of bricks to the fourth floor of a new condominium.

Special thanks to Thunder Bay writer Marianne Jones for her guided tour of Prince Arthur’s Landing, the new waterfront development area on Lake Superior. Her poetic lines are sandblasted in four granite benches located in the park.

Local writer Marianne Jones, author of The Serenity Stone Murder (Split Tree Publishing) took time from her new book promotions to provide me with a special tour of the area. During lunch at the new Bight Restaurant and Bar, we chatted about Thunder Bay’s literary scene. Marketing one’s work is always a concern but these challenges are compounded in the north where writers can feel isolated from the larger publishing centers.

The Norwestern Ontario Writers’ Workshop (NOWW) helps by providing inspiration and support for seasoned and emerging writers. Jones also meets and writes with one or two local writers at a local coffee shop. “It motivates us to write,” she said. 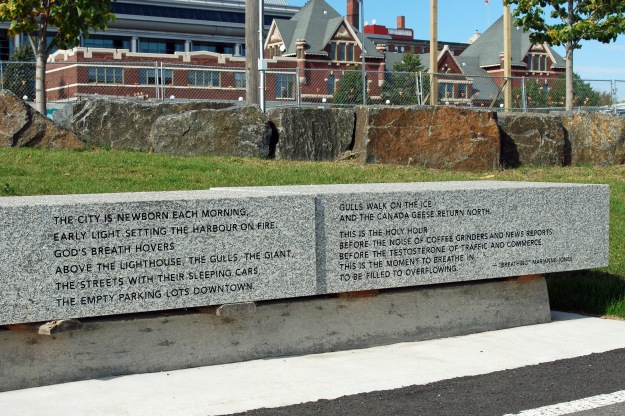 She is especially proud and excited about Thunder Bay’s award-winning waterfront where during this year’s Cultural Days, local writers would share their work outdoors at the new Spirit Garden. The Baggage Building Arts Centre Gift Shop also displays and sells local and regional books while the park spotlights literary selections sandblasted in granite benches. Jones’ work is displayed on four of those benches and I wondered why more cities didn’t adopt this practice. 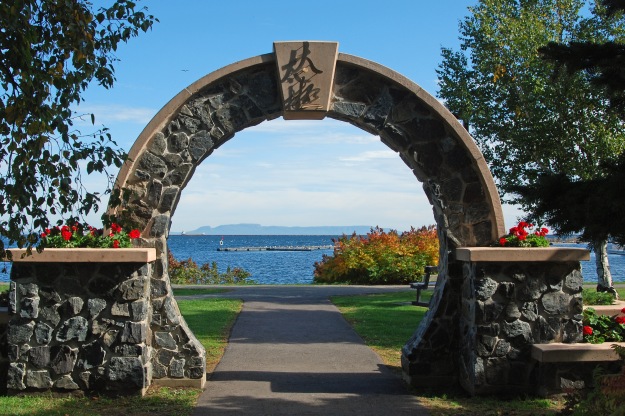 An inspirational view near the International Taiji Park at Prince Arthur’s Landing.

Before departing, my muse yanked my creative fishing line like a lake trout in deep cold water. In the distance, beyond the Marina Park, the Sleeping Giant appeared to open one eye and wink.  I wish I had more time to explore and write about the area. Perhaps, I would on my next visit.

Additional information* about Thunder Bay’s literary activities can be found below:

*Please note that while attempts were made to highlight as many of the literary activities in the area as I could, some may have escaped my radar. My apologies to those groups and individuals. Please send me a note in the comments section. I’d love to hear from you. 🙂

3 thoughts on “In Thunder Bay, Poetic Words on Waterfront Benches”