Canadian poet Josie Di Sciascio-Andrews polishes and re-polishes her work. Call her writing a labour of love! She writes when she can, between family and teaching obligations, and takes her time to ensure each word shines. This year, she released two new poetry collections: A Jar of Fireflies (Mosaic Press, 2015, 108 pp. ISBN 978-1-77161-138-1) and Letters from the Singularity (In Our Words Inc., April 2015, ISBN 978-1-926926-50-6). Below is a review of A Jar of Fireflies that will soon appear in Verse Afire, the membership newsletter of The Ontario Poetry Society:

A Jar of Fireflies by Josie Di Sciascio-Andrews was recently released by Mosaic Press.

Canadian poet Josie Di Sciascio-Andrews collects memories like she collects sea glass along the shore. It’s her quiet polishing of word gems that first drew me to her work in 2008 when her chapbook The Whispers of Stones was released by Beret Days Press.

In her latest poetry book, A Jar of Fireflies (Mosaic Press, 2015), she continues to collect the past and states that “memories light up the landscapes of our nights like fireflies”. Themes inspired by her familial remembrances, nature, love, flowers and dreams dominate this collection. What makes her work shine is her ability to pull in the reader with both her narrative style and sparkling-fresh metaphors. Three examples include: “summer days split open/like slices of ripe watermelon”, “the leaves are velvet tongues” and “I strike a match on stone/and memory ignites it to diamond.”

Fans of Di Sciascio-Andrews’ work will recognize such favourites as “Sea Glass” where memories are broken and scattered and fused back again and “Immigrants Fishing on the Oakville Pier” where “Across the lake, white sails/Bite the sky’s pale lip./A regatta of shark’s teeth/Aimed at the unsuspecting neck of night.”

Her poetry has been shortlisted for the 2013 Descant’s Winston Collins Best Canadian Poem Prize and the 2014 The Malahat Review’s Open Seasons Award. These and other award-winning poems are seamlessly woven with never before seen work to present a strong album of heartfelt and layered messages: “Behind me hangs the dream of you.”

Housed in a “blue daiquiri” painted cover with golden fireflies, her poetic work is showcased like framed petals on fancy crème paper, “like sunlit glass in her hands”.

Letters from the Singularity by Josie Di Sciascio-Andrews was launched by In Our Words Inc. (IOWI) in April 2015.

Additional information about Di Sciascio-Andrews can be found on-line. She is the Oakville branch manager of The Ontario Poetry Society and a full member of The League of Canadian Poets.

Last October, she launched A Jar of Fireflies during a members’ reading organized by The Ontario Poetry Society.

This Sunday, November 22 from noon to 3 p.m. in Mississauga, she will join other writers in the launch of The Literary Connection Volume II, an anthology of prose, poetry, artwork, and photography  released by In Our Words Inc. (IOWI).

Her poetry as well as an essay about her writing will appear in a forthcoming anthology spotlighting Italian-Canadian women writers compiled/edited by Lambton County writers Delia De Santis and Venera Fazio.

*from the poem “Sea Glass” by Josie Di Sciascio-Andrews, A Jar of Fireflies (Mosaic Press, 2015) 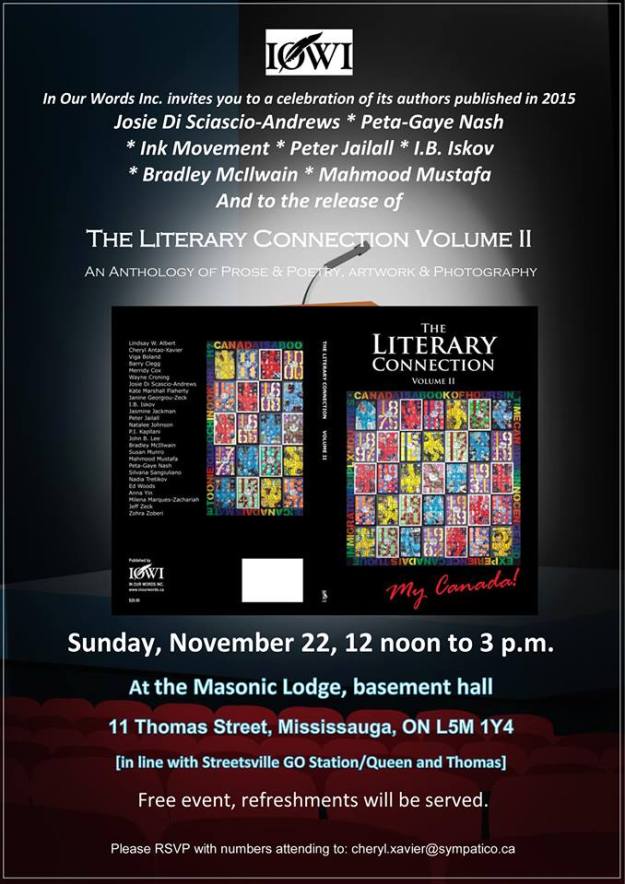 Celebrating the work of Josie Di Sciascio-Andrews and other authors of In Our Words Inc. (IOWI)