Some people stuff history into a closet. I can attest to that.

Any time I opened a history book in high school, all those dates/figures/names would cobweb my eyes and lull me to sleep at my desk. I’m surprised I even passed the course.

History is all around us: a sample of featured books on display during Sarnia-Lambton’s Sesquicentennial Celebration held August 22, 2017.

When all the neighbors pulled out their Canadian flags and other memorabilia to celebrate the country’s 150th anniversary of its Confederation, I felt the urge to de-clutter my office and clear my mind of all the festive noise and streamers. Seriously, how does one erase the controversial rental cost ($120,000) and image of the world’s largest (six-storey, 30,000-ton) rubber duck that made its official Canadian debut at the Toronto harbour during the Canada Day weekend?

That’s when it hit me, as I tugged on a box of unsorted literary magazines, moved a pile of photo albums onto a shelf, and opened a small blue/white/gold cardboard box labelled “The Spirit of ’70: 1870 Manitoba Centennial 1970” .

De-cluttering can unearth some historic or memorable treasures.

History is someone’s memories. It doesn’t have to be about politics and war. It can be closer to home, even tucked in a drawer inside your own desk.

Why else was I saving this 47-year-old Souvenir Cake Box? I certainly don’t remember the taste or style of the miniature cake or the Centennial event in which I received it. Yet, for all these years, it housed approximately 30 little pencils from my childhood. 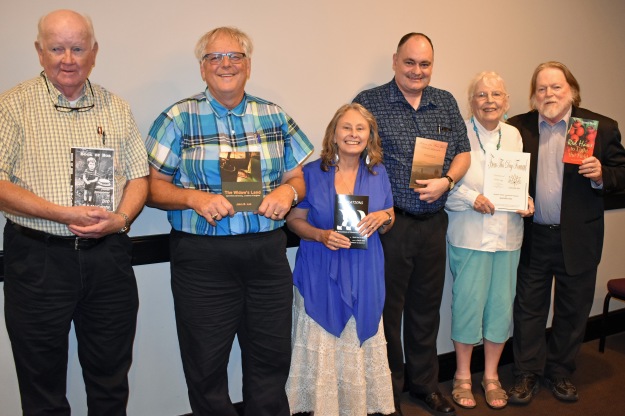 Last Tuesday, several writers gathered for Sarnia-Lambton’s Sesquicentennial Celebration! The audience appeared smaller than normal but similar to the dwindling attendance at other literary events I’ve attended this summer. The emcee (Sarnia poet James Deahl) wondered whether the event would have attracted more people if it had been advertised as a literary versus an historic event. I wondered if people were just overwhelmed by busy summer schedules and are just taking a much needed break.

For those who missed this local August 22nd celebration below are some snapshots spotlighting the six featured readers!

Each of the presentations was thought-provoking and inspiring. 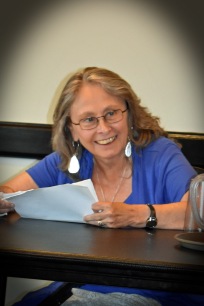 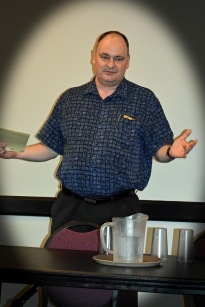 Historian Bob McCarthy shared a moving (and humourous) story about the time his parents forgot to tell him that his family had moved to a different home. The story is part of his memoir collection The Book of Bob to be released November 2017.

Poet/photographer Lynn Tait read six poems including a new creation titled “The Bird Watcher’s Daughter” with the memorable line my heart flies with the cardinal and the powerful poem “Strip” with its hard-hitting line the punishment never fits the crime.

Deahl shared work from his new book Red Haws to Light the Field (Guernica Editions, 2017) including the poem “Adoration & Prayer” with its lines Let my tongue be the stonemason’s hammer/let red haws light the field.

Prolific Sarnia writer Norma West Linder shared five poems from her book Adder’s-tongues (Aeolus House, 2012). In her humourous poem “Chokecherries” she reflected on her memories of Manitoulin Island and how her mother sprayed: crimson juice/across the spotless bosom/of her astonished hostess.

The evening concluded with six poems by the prolific out-of-town poet John B. Lee. From his book In the Muddy Shoes of Morning (Hidden Brook Press, 2010), from the poem “Vantage” he provided more sustenance for future thought: I grip at ghosts/and rise like mist in heat/where memory sets heaven/in a bowl of bone….

John B. Lee often writes about the history and memory of farming in his poetry books. Most poets will include some form of history or current events in their work.

Thanks for the memories….for sharing what matters to you….for teaching me that history plays a vital role in everyone’s life.

ADDITIONAL INFORMATION ABOUT THE FEATURED READERS:

John B. Lee: author of over 60 books and twice winner of both the Milton Acorn Memorial People’s Poetry Award and the CBC’s Canadian Literary Award

Lynn Tait: award-winning photographer and author of Breaking Away

Interested in attending a future literary event in the Ontario? Check my partial list of upcoming public events, updated weekly or as time permits.